Career Success A to Z: G is for Gender Gap 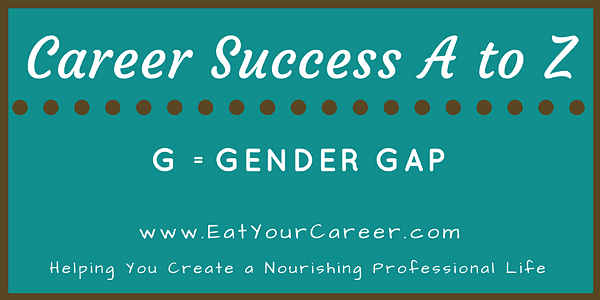 Unlike some of the other articles in this series, I knew immediately that “G” would be devoted to discussing gender and, more specifically, the gaps that exist in the workplace between men and women.

Let me say at the offset that I wouldn’t necessarily label myself a feminist, but I am a female (surprise!) and I’m active in the world of the workplace, and with that the comes a certain amount of awareness.

It’s not my intention with this article to spark a debate of any sort, nor is my goal to become some kind of social activist with regards to this topic. This isn’t me making a grand political statement. My job—in everything I do here—is to help you grow as a professional.

Many of my readers are women (though certainly not all). By encouraging everyone, men and women alike, to think about these things, I hope to broaden awareness and ideally, to show how you can avoid falling into this “gap” that inarguably exists.

The gap I’m speaking of is quantifiable in a number of different respects. Below, I’ll discuss three key areas.

However, I also want to say something that I think is often missed in these conversations: Men and women are indeed different—both physically and emotionally. I think there are natural strengths that each sex offers, just as there are natural unique abilities that different people (regardless of sex) contribute in the workplace. The goal, in my opinion, should be that each person is judged based on performance and contribution. In some cases, that might mean that you (whether you’re male or female) have to adapt your natural tendencies for the good of your career.

These three gaps don’t have to be true for you. They are generally true in the American workplace, according to unbiased research, but that doesn’t mean you have to be impacted. If we all do our part, we have the ability to change the numbers—with or without institutional support for “equality.”

The wage gap between men and women is well documented and frequently discussed. According to the Pew Research Center, women earn on average 83% as much as men (2016). Other publications state that women make 76 cents on the dollar compared to men.

Regardless of the exact size, a gap indeed exists.

There are a number of different reasons cited for this discrepancy. Some people say it’s because women are less likely to advocate for themselves and “demand” higher pay the way a man might. Others say it’s because a woman’s contributions are inherently viewed as “less valuable” than a man’s. Still others insist that women are more likely to put their careers on the back burner as they focus on raising children, and the salary data is impacted as a result, or that women are more likely to hold lower-level jobs.

Interestingly, in researching for this article, I discovered that the gap itself is much, much smaller when you compare the pay between men and women who hold the same jobs and possess the same level of experience. It still exists, but it’s much less substantial.

No matter the cause or specifics, one fact remains true: Everyone has a personal responsibility to themselves to advocate for their worth in the workplace.

Financial discussions are never easy—though they may come easier to some. I always encourage people to articulate their value to the organization. That means that you should never discuss your desires for a raise or higher pay based on any other factor than the direct impact that your work has had (or will have) on the company.

Recommended Reading: Why You Don’t Deserve a Raise

Now, some will argue that women have to do a lot more to achieve the same pay as a man. I get it. In some environments, that is an uphill battle we face. But it’s not one I shy away from. I don’t want the same pay as a man because it’s “fair.” I want the pay I deserve for the work I do, which is what I want for everyone. And to be honest, what other people make isn’t my business.

I encourage you to focus on your contributions and crafting the most compelling argument possible for why you deserve the wage you want.

The confidence gap has been in the spotlight recently thanks in part to some great work done by Claire Shipman and Katty Kay, both seasoned reporters and authors of the book, The Confidence Code.

The main discussion point is this: Generally speaking, women tend to hold back on voicing their ideas and opinions in the workplace where men tend to show less restraint. Women are much more likely to fall victim to Imposter Syndrome and, in general, we experience greater levels of self-doubt than our counterparts.

Whether this is caused by nature or nurture is, again, irrelevant. We all have the power to enhance our professional confidence.

In the workplace, confidence is profoundly rewarded. It influences how others treat you and the opportunities they afford you. These things ultimately play out in financial terms as well.

I encourage everyone to get comfortable speaking up at work. It enhances your reputation and allows you to contribute in deeper, more meaningful ways—which is what it’s all about. Don’t view yourself as “less than” anyone else. Respect the organizational hierarchy and remain professional in all your interactions, but recognize that you have a voice for a reason. Use it.

Recommended Reading: Career Success A to Z: C is for Confidence

Much has been made of the lack of women in top executive-level positions in business. According to the Center for American Progress, women hold 52% of all professional-level jobs, but only 14.6% of executive officers and a measly 4.6% of Fortune 500 CEOs.

Once again, the reasons are plentiful (see above) and, for the purposes of this article, immaterial.

What I want to do is encourage you to think of advancement as a deliberate choice. Don’t look at it as a gift bestowed upon the lucky few. It is not something you deserve by showing up; it is an earned privilege and responsibility.

Career advancement is the result of a deep desire—whether you aspire to be a CEO or anything else. I don’t think men inherently want it more than women, but I do think women tend to feel the personal sacrifices required a little more deeply. And it does take sacrifice.

I believe that everyone—male or female—has to determine what level they want to achieve professionally and what they’re willing to do to make it happen. Women are capable of advancement, just as men are, but we all have to choose our path.

That doesn’t mean it will be easy for anyone of any gender. It’s a demanding, arduous road to move up in the business world. If that’s what you’re looking to do, I assure you it can be done if you’re willing to make that choice and do the work.

The Center for American Progress also notes that in 1980, there were no women in the top executive ranks of the Fortune 100. So things have changed, and I believe they will continue to.

I know this article might not be exactly what some people want or expect. I do understand that there is, in some cases, institutional discrimination that makes it difficult for women to get a fair deal. But I’m a career coach. I believe in working within a system that, for all its faults, still offers a wealth of opportunity for all.

I support equal pay for equal work and equal treatment for all. But I also believe in taking control of the things within our control. For women in the workplace, that means we must recognize the reality of what we’re facing and do everything we can to overcome it—to use our actions to demonstrate just how powerful we are.