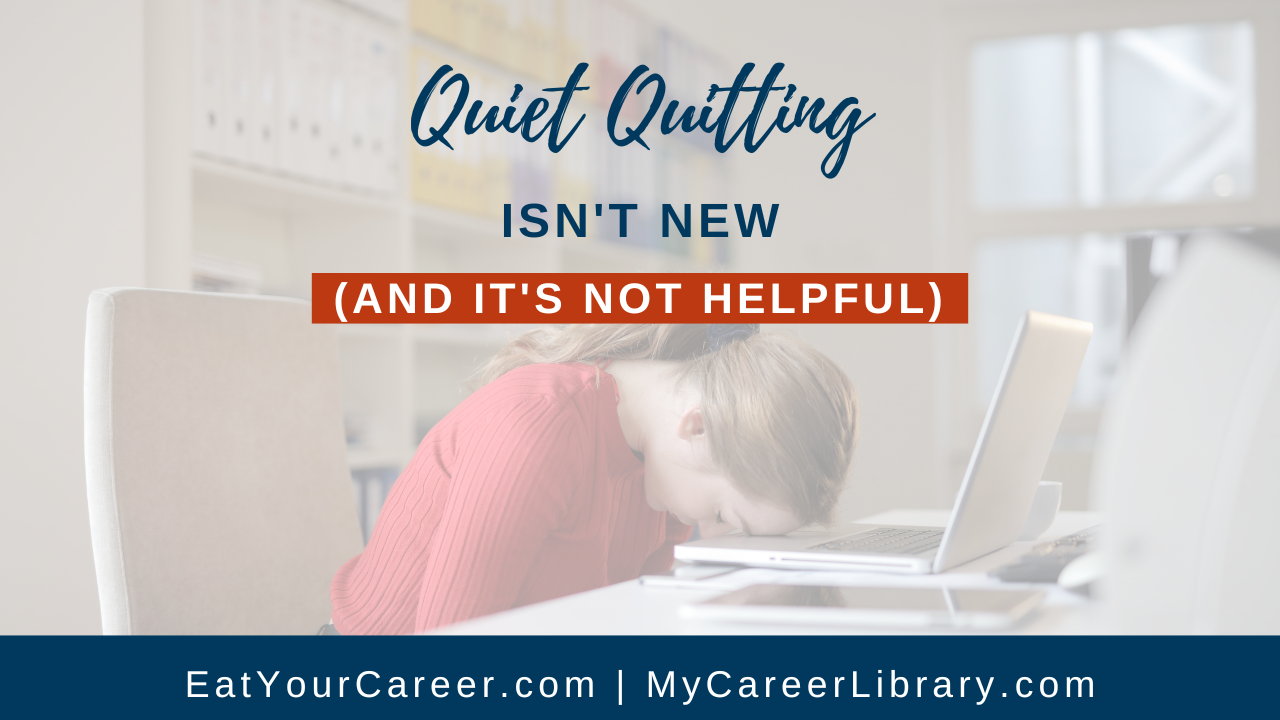 Well, I guess we have to talk about it.

If you’ve been paying attention to the news and social media over the past few months, you’ve undoubtedly heard the term “quiet quitting”. For some unknown reason, this concept has gained a lot of traction lately, but don’t be fooled. It’s not a new idea. It’s also not an especially helpful addition to the very necessary conversations being had around work/life balance, boundaries, and the monumental shifts happening in the workplace as a result of the pandemic.

Like most things online, the discussions regarding quiet quitting seem to involve two extremes.

One side says this is a totally acceptable way of behaving at work— “It’s called doing your job!” These folks say that giving it a negative label is the equivalent of management making employees feel bad for setting healthy boundaries.

The other side says it’s a career killer—a surefire way to hurt your long-term career prospects.

Personally, I think both sides are right and both sides are wrong. This is why I’m not very good at social media. I believe that most topics, especially those related to the workplace, have multiple sides and a certain amount of complexity. Trying to boil everything down to pithy soundbites doesn’t really deepen our understanding.

Again, quiet quitting isn’t a new phenomenon. In the past, we’ve called it “slacking” or “flying under the radar” or “skating by.”

And guess what? We’ve ALL done it from time to time. Maybe you’ve struggled with some personal issues—a break up, trouble with the kids, illness—and you’ve had to take a step back at work. You’ve mentally shifted into a place where you said, “For now, I’m just going to show up and do what I can. Nothing extra. Just the bare bones.”

You’ve done it. I’ve done it. And it’s perfectly okay! Everyone understands and your career (more than likely) will survive.

We all have to do this occasionally. It’s part of the natural ebb and flow of life. We only have a limited amount of time, energy, and attention. Sometimes, we have to distribute those things elsewhere, and there’s little left for work.

But taking this kind of “nothing extra” approach for an extended period of time? That’s a different thing altogether.

No one wants to work with someone who always does the bare minimum. We can all fill in the gaps for a colleague who needs it from time to time, but not forever.

Sure, if you’re checking all the boxes, you might be “doing the job,” technically, but you’re not doing it especially well. People can argue that they’re not being paid for going over and beyond. And I suppose that’s true. But it’s a very short-sighted way of looking at things.

Your contributions help establish your earning potential for the future. Raises and promotions are given based on past performance and expected future performance. If you consistently do the bare minimum, you’ve done nothing to warrant a bigger investment. At best, you can hope to keep the job you have and continue earning your current salary. But you won’t get anything more than that. At worst, you’ll be replaced by someone who actually does the job well and gives it a little something extra.

You can’t have it both ways—you can’t expect to do the least and get the most from your company in return.

I’m not saying you have to subscribe to hustle culture or work yourself to death. You can set healthy boundaries and maintain a reasonable work/life balance while still doing more than the bare bones minimum expectation.

As with all of kinds of “hot button” topics, I encourage you to take a thoughtful approach and avoid going to extremes. Take care of yourself and give the best you can (within reason) to your work. If that’s something you simply don’t want to do, perhaps you should consider good old-fashioned quitting. Find a job you want to give a little more to.

If, at the end of the day, you want to do the very least you can get away with—that’s fine too. You have that right. But don’t complain about where it lands you!