Is a Two-Week Notice Necessary When You Quit? 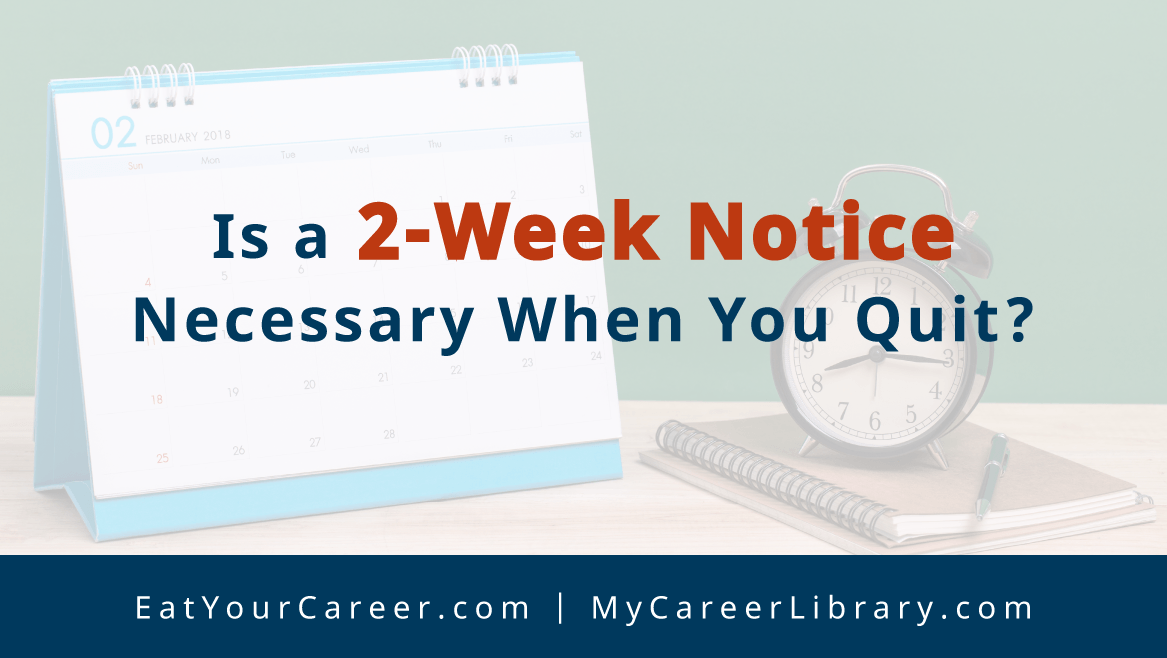 Recently, I’ve seen some discussion around the topic of the traditional two-week notice period given when you quit a job. Some folks are saying it’s no longer necessary. Some argue it is. So, as a career coach, I wanted to weigh in on the topic and offer my professional opinion.

Simply put: YES, of course a notice period is necessary! In the US, two weeks is standard.

I don’t think I’m old-fashioned saying this. To me, it’s just logical and respectful.

But perhaps you’ve heard some other perspectives. So, let’s dissect the alternative point of view and discuss why it’s a short-sighted approach.

Why are people saying a two-week notice is no longer necessary?

NOTE: This is true in most cases, unless you have a contract that explicitly states otherwise. I’m not an attorney so seek legal counsel if you need more specific advice.

Even though it’s not required, in the vast majority of cases, an employee DOES receive warning when their job is in jeopardy. If you’re at risk of being terminated for cause, you have likely received many formal and informal notices defining the required improvements and the potential consequences if not they are not met. If you’re at risk of being laid off, you often have some indication of this possibility before the fact. It’s either been discussed or it’s happened elsewhere in the company, or the writing is on the metaphorical wall.

While a lot of people claim that a layoff or a termination was “completely out of the blue!” it’s usually not. In my experience as a coach, 90% of the time, there is some kind of warning. It’s not always delivered with the urgency or clarity one would hope for. But it’s almost always there if you look for it.

Still, there are times when no warning is given. Companies can, and sometimes do, let employees go without so much as a hint to suggest it’s approaching. Sometimes they suffer the consequences. The employees who remain may struggle with morale. The company’s reputation in the wider workforce can suffer over time. But admittedly sometimes, there are no consequences.

That doesn’t mean YOU can do the same thing without consequence.

The purpose of offering a notice period is to help YOUR TEAM. You don’t want to leave people in a lurch, trying to pick up the slack left in your absence without any time to prepare. That’s a great way to burn bridges. I always say: “A last impression is a lasting in impression.” How you leave is how you are remembered.

In most cases, your team won’t be able to identify a replacement for you within that period. They’re going to have to fill your gap while maintaining their own work. You’re using these two weeks to get them up to speed and help ensure there is minimal disruption when you’re gone.

Offering a notice period is a demonstration of professional credibility. Even if you are dying to leave this job. Even if you downright hate it. Your reputation is more important than 2 teensy tiny weeks.

It’s also been argued that some companies don’t even allow employees to stay for two weeks. Once you put in your notice, they escort you out!

Well, I’m not a fan of this behavior but if that’s how the company operates, fine. You can and should still make the offer.

Some people argue that a two week notice period can be super uncomfortable, as other employees question your decision and pry to get details on your grievances before you leave.

Again, I say: IT’S TWO TEENSY TINY WEEKS. You can deal! Don’t share anything negative on your way out. Just keep your head down and focus on transferring your work to others.

The last argument I hear is that people don’t want to offer a notice period to their current employer because the new employer wants them to start right away.

This is a red flag!! If your new employer is complaining about you offering the basic professional courtesy of a two-week notice, that’s a bad sign of things to come. It means they don’t respect professional norms and etiquette, and they expect you to sacrifice your reputation to please them. My advice would be to run fast and far!

I have some strong feelings on this, as I’m sure you can tell. But I get worried when I see people spreading bad information—and lately, I’ve seen it a lot.

Remember that your career is one of your most valuable assets! Don’t squander it so you can have some false sense of superiority as you move on to your next job. Leaving in a blaze of glory does nothing to help you or your team, and it doesn’t really hurt the company either. You “win” nothing and lose a lot! Leave in the right way with your dignity and your head held high.