Career Success A to Z: F is for Fail Forward 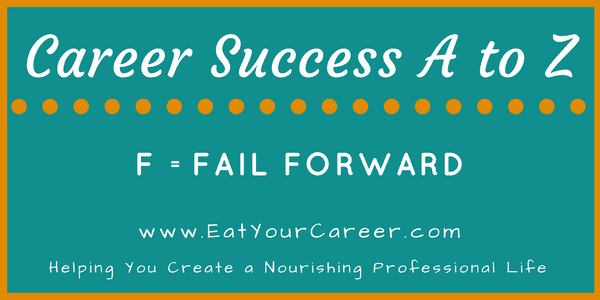 After a short break for the holidays, we’re back in full swing and covering an appropriate topic as we enter a new year.

While most of us are thinking of goals and resolutions, we tend to also struggle with another f-word at the same time. That one is FEAR.

The fear of failure is often the very thing that stops us from achieving our goals. After all, it’s scary to change your life. It requires effort and risk and those things are inherently uncomfortable.

What if we emotionally invest in the idea of something new and it doesn’t work out? What if—worse still—we fail in some spectacularly public way? How will our delicate egos survive?

When it comes to career success, failure should be seen as an inevitable and valuable part of the process. If you’ve been lucky enough to never experience it, you can be certain you’re not trying hard enough. You’re not challenging yourself. You’re stuck in the comfort zone. And that’s not where greatness is born.

If you want to truly grow and advance and achieve the greatness you desire—whatever that looks like for you—facing fear of failure, and indeed failing, is simply par for the course.

There is so much evidence for this. Ask any successful person and they’ll likely have a dozen stories or more that prove the point. The difference for them is that they used failure to propel themselves forward. They didn’t use it as an excuse to give up or confirm the fear they undoubtedly were facing.

So how do you fail forward instead of backward? I’ve thought about it a lot because I’ve failed a lot. At times, I’ve failed privately. Others have been of the more spectacular variety. But I can honestly say with hindsight that my failures have been enormous stepping stones.

I’ve actually failed so many times that I’ve created a process for what to do. If you’ve been following me for any period of time, you know I love a good process. And I love it even more when I can weave it into a creative acronym.

Think of it like this: To fail forward, you have to keep it REAL.

Let’s discuss each element in detail.

Failure is nothing more than achieving an unexpected result.

If you keep this in mind, you can move forward. If you, instead, attempt to use failure to define everything that’s wrong with you or everything you’re incapable of, you’re going to sink into it and failure with drag you down.

When you achieve an unexpected result, it’s useful to explore how that happened. What exactly created the result? What did you do (or not do) and how did that impact the outcome?

If you’re not willing to look at your part, you’ll always be the victim. The world will act upon you and you’ll be its unfortunate pawn.

Honest self-assessment is a crucial part of this process, as is the ability to differentiate between the things you control and those you do not. Sometimes, you are indeed a victim of circumstance and failure or success is nothing more than luck or lack thereof. But it’s rare. More often, you played a hand in creating your own fate.

Don’t beat yourself up, but seek clarity.

If you failed to meet your goal of getting the promotion you wanted, ask yourself where things went wrong. Did you effectively articulate your past accomplishments? Did you possess all the necessary skills and qualifications? Did you develop and leverage your good reputation and strong relationships?

Remember too that you can’t always see yourself clearly, and others may have valuable input to share. Ask for feedback from trusted advisors to ensure you’re getting a full perspective.

The biggest mistakes people make in the examination process are either taking too much responsibility for the outcome or not enough. So put on your best critical thinking cap as you do this.

This step is two-fold. The first part is to accept what has happened. The past is done and you can’t change it. You can, however, change the future so that is where your focus rightly belongs. Don’t waste time dwelling in regret, self-pity or resentment.

The second part involves apologizing if your failure has negatively impacted others. In the workplace, people rely on you to achieve your expected outcomes. When you don’t, the situation can cause ripple effects.

If you fail to meet a deadline, for example, others may in turn may miss theirs or be forced to adjust their goals in response. Your failure has created negative consequences. Don’t ignore this! Take responsibility and apologize for your part. Shifting blame or refusing to acknowledge it will only compound the problem.

Of course, this is also something you shouldn’t dwell in. Own the situation, then move forward and fix it.

The final part of the process is to leverage what you’ve learned and use it to do things differently in the future.

This is the MOST important part of the process. Without it, you’ve wasted the opportunity that failure presents.

Every misstep is your chance to improve. Every failure holds invaluable lessons for the future. Use those lessons to avoid making the same mistakes. After all, that is the true failure—not learning from the past is the only thing that stands in the way of your future success.

Finally, remember this: Failure is not a permanent state. Just because you haven’t achieved your desired result now, doesn’t mean you never will. Just ask J.K. Rowling, author of the Harry Potter series—the woman who was once nearly homeless and is now wealthier than the Queen of England. It took twelve publishing rejections before the 8-year-old daughter of an editor demanded to read the rest of the book. The rest is history…and a remarkable lesson for those of us with magical dreams for the future.

Go forth and FAIL!