Career Success A to Z: E is for Etiquette 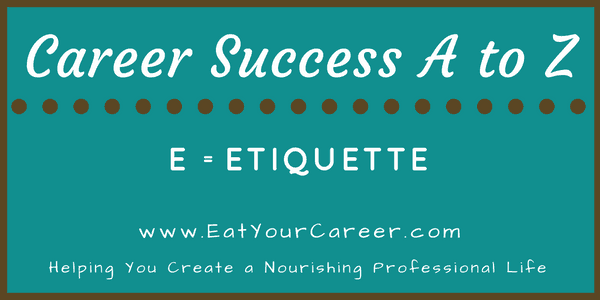 Before we talk about etiquette, let’s first consider another e-word: Elevator.

Next time you’re in one, I want you to observe normal elevator behavior. It’s odd how everyone seems to follow the same set of rules—unspoken and yet, known by most.

When on an elevator, people always tend to face the same direction (toward the door) and they frequently adjust their position in an attempt to keep equal spacing between them and their fellow passengers. People offer common courtesies like holding the door for someone racing to make it on or pushing the button for someone who can’t reach it. Most people speak in slightly hushed tones so as not to involve others unnecessarily in their conversation. When traveling alone, they keep their eyes firmly planted on the numbers ticking by, indicating the floor the elevator is passing.

Elevators are like little floating bubbles of society with their own distinct etiquette.

If you ever find yourself in an elevator with someone who bucks these unspoken rules, you’re likely to feel uncomfortable. Maybe they’ll stand too close to you, or they’ll face you instead of the door. It’s not necessarily malicious behavior, but it just feels off.

That’s how etiquette works and why it’s so important in the workplace. When the unspoken rules of professional behavior aren’t followed, it makes you look out-of-sync. Even worse, it can make you look rude, immature, inconsiderate and even incompetent.

The word etiquette is often considered old-fashioned. For most people, it conjures ideas of Emily Post advising women to “only carry small, tidy, square packages or anything that is obviously nice, like flowers or fruit.” Other unwieldy packages should be given to men. (1922)

Personally, I adore this kind of thing. It’s entertaining to see how social and professional norms have changed over the decades.

Modern business etiquette is a unique beast. It’s powerful when used well. When ignored, it can be dangerous for your career.

To help expand on this concept, I’d like to offer a short excerpt from my Modern Business Etiquette E-book. An extended excerpt is available in the Free Career Resource Library as well. (Members can download it here)

What is Modern Business Etiquette?

Simply put: Etiquette is really all about helping people feel respected and comfortable in your presence.

The Impact of Etiquette

Etiquette creates perceptions that can either help you or hurt you. Perceptions aren’t necessarily reality, of course. Just because someone has poor etiquette doesn’t necessarily mean they’re a bad worker or a bad person. But they can be perceived that way. If you’re not using proper etiquette, you may unknowingly be harming your relationships and creating a reputation that doesn’t serve you—and maybe creating an image that isn’t an accurate reflection of who you are and what you offer in the workplace.

Good etiquette can make you look more competent, capable, successful, smart, and respectful. It doesn’t necessarily mean you ARE any of these things. But it establishes that perception. Likewise, poor etiquette can make you look incompetent, incapable, unsuccessful, dim-witted and disrespectful. Again, it doesn’t mean you ARE those things, but that’s the perception it can create.

While perception isn’t necessarily reality, it does indeed impact your reality. Your reputation and your relationships have a deep and lasting effect on your career. They influence the way people see you and thus how they treat you. They can (negatively or positively) contribute to the opportunities you are afforded in the future. In the business world, perception is often just as important as reality.

Etiquette can influence your ability to negotiate effectively. If someone perceives you as being an inexperienced or rude professional, they probably won’t be easily persuaded to make a deal with you. Conversely, demonstrating proper etiquette in the negotiation process provides unspoken—even subconscious—leverage. It helps demonstrate that you are a savvy, confident and shrewd businessperson. Others will deal with you differently as a result.

Etiquette can influence your ability to get the sale. When was the last time you bought something from someone you didn’t like? It doesn’t happen. If someone has poor etiquette and you feel disrespected, you probably aren’t going to trust him or her with your purchase. Using proper etiquette helps establish a respectful, comfortable rapport, which eases the sales process.

Because etiquette has a powerful impact on how others see you, it can influence your chances of getting a raise or a promotion. If you’re looking to advance your career, using proper etiquette will help elevate your standing.

Etiquette can also impact your team’s ability to work effectively together. After all, think about that law firm where the young admins and the older admins were butting heads over conflicting standards of etiquette [reference to a story told earlier in the e-book]. They were clearly not performing at peak levels. Even minor, seemingly inconsequential conflicts can create intense turmoil on a team.

Ultimately, etiquette is all about creating positive interactions with people—and that’s what relationships are built upon. Lack of etiquette, or misunderstandings around this topic, will impact your ability to create strong, authentic bonds with people. There’s no quicker way to turn people off than by doing something that they perceive as disrespectful or inappropriate.

There is no doubt that understanding proper etiquette gives you a distinct edge in the business world. It helps others perceive you as a responsible, competent professional who is trustworthy, experienced and respectful.

“Respect is like air. You don’t notice it until it’s missing. And then, it’s all you notice.”
–Crucial Conversations: Tools for Talking When Stakes Are High

Etiquette is a powerful tool when used appropriately.