Career Success A to Z: A is for Affirmation

…and we’re off! Career Success A to Z has officially begun!

Today, we’re exploring Affirmations. Before I get into what they are and how to use them, let’s first discuss why they’re necessary for career success.

The human mind is a tricky thing. According to Deepak Chopra, esteemed neuroscientist and philosopher, we have approximately 40,000 to 70,000 distinct thoughts each and every day. The National Science Foundation estimates that number is actually between 12,000 to 50,000, so the jury is still out on the exact number, which isn’t surprising. Some days I’m lucky to have 5 distinct thoughts…

Regardless of how many we start with, here’s the kicker: About 98% of the thoughts we have today are the exact same as the ones we had yesterday. Our brains are totally habitual. We think about the same things over and over again: What to cook for dinner, what to wear to work, how to find a parking spot, where’s the coffee?

Sadly, a great number of those engrained thoughts are distinctly unhelpful. We repeatedly say things to ourselves that are actively counter-productive to our success in life. We say them so often, in fact, that we hardly know it’s happening. They’ve become programmed in our minds like code in a computer. We say things like:

Why do we have such negative thoughts? We’d never talk to a friend or loved one this way! And yet, we do it to ourselves.

The reason is as complex and multi-faceted as human nature itself. These ideas are implanted in our minds at some point, often in childhood, and instead of questioning them, we simply allow them to take root.

We’re not inherently negative people because of it. We’re not “bad” in any way. We’re just…normal.

In the past, I’ve characterized this nagging voice as The Saboteur.  I’ve also suggested you get to know your own inner voice a little better by simply listening to it more carefully.

If you’re really listening—and you’re really honest—you’ll probably hear some disturbing things. Or, at the very least, you’ll hear a few things that aren’t serving you personally or professionally.

That’s where Affirmations come in. Affirmations are a way of re-programming your brain. Don’t worry, this isn’t brainwashing or hypnosis or anything like that. Affirmations are just a tool to fight back against the pestering inner voice that wants to keep you down.

Remember the old Saturday Night Live character, Stuart Smalley (played by the great Al Franken)? He used to turn toward the mirror and say to himself, “I’m good enough, I’m smart enough, and doggone it, people like me!” (Watch it on YouTube here)

Well, Mr. Smalley knew a thing or two about retraining the brain. He was using an Affirmation.

I know, I know. Don’t let that Stuart Smalley turn you off though. These things are powerful, even if they feel a little silly at first.

Affirmations are short, positive declarations that help counter the negative voices in your head and empower you. So instead of saying, “I’ll never be able to do this,” you’d retrain yourself to say, “I’m capable of meeting this challenge.”

They’re always written (and said) in present tense. So, for example, instead of saying, “I will be successful,” you’d say, “I am successful.”

One of my favorites that I’ve used for years is: “I’m infinitely creative, resourceful and whole.” This seems to be a good catch-all for any of life’s struggles. Believing I am all of these things means I can successfully meet any challenge I’m facing. It keeps me focused on giving all I have to today because there’s an infinite source from which I exist.

How to Use Affirmations

Once you’ve created a few positive affirmations for yourself, write them down on index cards or post-it notes and place them in visible locations around your home and office as reminders. Once you’re in the habit of repeating them on your own, you won’t need the reminders any longer.

Consider placing them on:

Whenever possible, say them out loud, not just in your head. This helps make them more real. Don’t worry if you feel silly! No one is judging you except for that sabotaging voice in your head. Don’t let him win!

I’ve been using affirmations in my career for years. In fact, I’ve come up with hundreds of them. I’ve recently decided to start sharing them freely and openly and in a creative way.

Each week here at Eat Your Career, I’ll be posting a new image of a Positive Career Affirmation like this one: 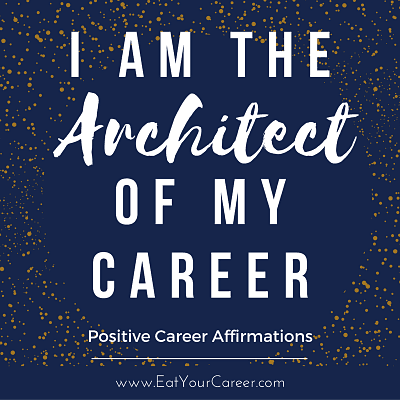 If you want to make sure you don’t miss any of my future Positive Career Affirmations or articles in the Career Success A to Z series, become a member of the Free Career Resource Library. Members have the option to sign up and receive blog posts directly in their email inbox as soon as they are published.