Admin Tip: How to Get Your Boss to Give You More Control

April is Admin Appreciation Month, so today I’m sharing some tips specifically for all of you hardworking admins. As a proud, former executive assistant, I know how challenging your role can be.  One of the most common frustrations I hear from admins goes something like this: “How am I supposed to be a true partner for my executives when they are so hesitant to release control?”

If you’re an admin who wants to take on more responsibility but your boss won’t give you the control you need to do so, here are some things to try:

Trust is the foundation; it’s an absolute requirement for any successful executive/assistant partnership. As a support professional, your executive needs to believe fully that your primary function is to help make his or her life easier. They need to know that you have their best interests at heart. When you make a suggestion to take on added responsibilities, they should understand (based on that trust) that it will help make them more efficient and effective. When you ask them to release control, they need to trust that whatever they are releasing is in good hands with you. As hard as it may be for them to let go, having trust will make it possible.

If you don’t already have a deep level of trust in your partnership, this is the place to start. Trust is built through consistent, reliable behavior. Your executive needs to know that they can expect top performance from you at all times. If you believe your performance already warrants this trust but it’s not yet there, consider having a conversation. Discuss your desire to take on more responsibilities and why it’s in your executive’s best interest to release control to you. Then, ask explicitly for the trust required to make that happen.

Many executives have never been trained on how to properly leverage the talents of their support staff. They need you to teach them—and, in my experience, they need more than a gentle nudge. They need clear, confident instructions.

When you identify a specific task you can or should take over for your executive, speak up assertively. Say something like, “I can handle that for you,” or “Why don’t you let me take over?”

Wherever you can, assume responsibility for admin duties. That’s your job after all. Grab anything and everything that falls under your scope of work before your boss can take control. The more he or she can see that you’re capable of handling these things without them, the more they will be willing to send your way in the future. As you demonstrate confidence, their confidence in you will grow.

3. Suggest a trial and review period

When you ask to take over certain responsibilities, don’t make it sound like an irreversible decision. That can make it harder for your executive to release control. Instead, suggest a short trial and review period. Say, “Why don’t you allow me to do this for 30 days and see how you like it? If you want to take it back at that point, no problem.”

This gives your executive an easy way out of the situation if he or she isn’t happy. But it also gives you a chance to show what you can do. Even in just a short period of time, you may be able to create enough of a positive impact to inspire your exec to release control permanently.

Executives are like the majority of human kind—they don’t like big, sweeping changes. It’s much easier to adapt to change when it happens in small steps. Therefore, don’t ask for them to release control over everything all at once. Instead, take it in stages. Maybe just a small portion of a task can be handed over. Then, once you’re successful with that, you can take another small piece.

For example, you may have heard that it’s a best practice for assistants to have full access to their executives’ email inboxes. That way, the assistant can help organize and prioritize messages and respond to urgent requests on the executive’s behalf.

Not surprisingly, this kind of suggestion often gets a lot of pushback from executives. Email is a highly sensitive and very important part of doing business. Releasing control of it all at once will probably strike fear in the heart of any executive.

So, instead of asking for full access, start with just one small step: ask for read-only access first. Even if that’s all you get, you still gain valuable context and insight by being able to see what’s happening in there. Then, once that’s working well, ask for authority to move certain types of messages into certain folders to help organize the inbox. After that, you can slowly add more and more authority, until you eventually have the ability to do everything you need.

Try this approach with any major responsibility you want to take on. Breaking it down into bite-sized pieces will make the process more manageable for you and more easily acceptable for your executive.

5. Position it as an “investment.”

Finally, recognize that your executive may resist handing things off because of the (perceived) time it takes to train you on how to do it. If that’s a concern directly expressed, be sure to emphasize your ability to learn quickly and your existing skills with similar tasks. You can also ask if there’s someone else who can get you up to speed—that way, the executive doesn’t have to use his or her time for training.

Always position the time it takes to learn something new as an investment. Yes, it takes time on the front end, but it will pay dividends in the end for your executive. You’ll be able to handle this task on their behalf from here on out, saving them many more hours in the future.

Above all else, be pleasantly persistent. Your executive might hold tight to control on certain things, but with a little effort on your part, that could change in the future. Don’t give up just because you heard “no” the first time around. You don’t have to nag; just continue to make your case. 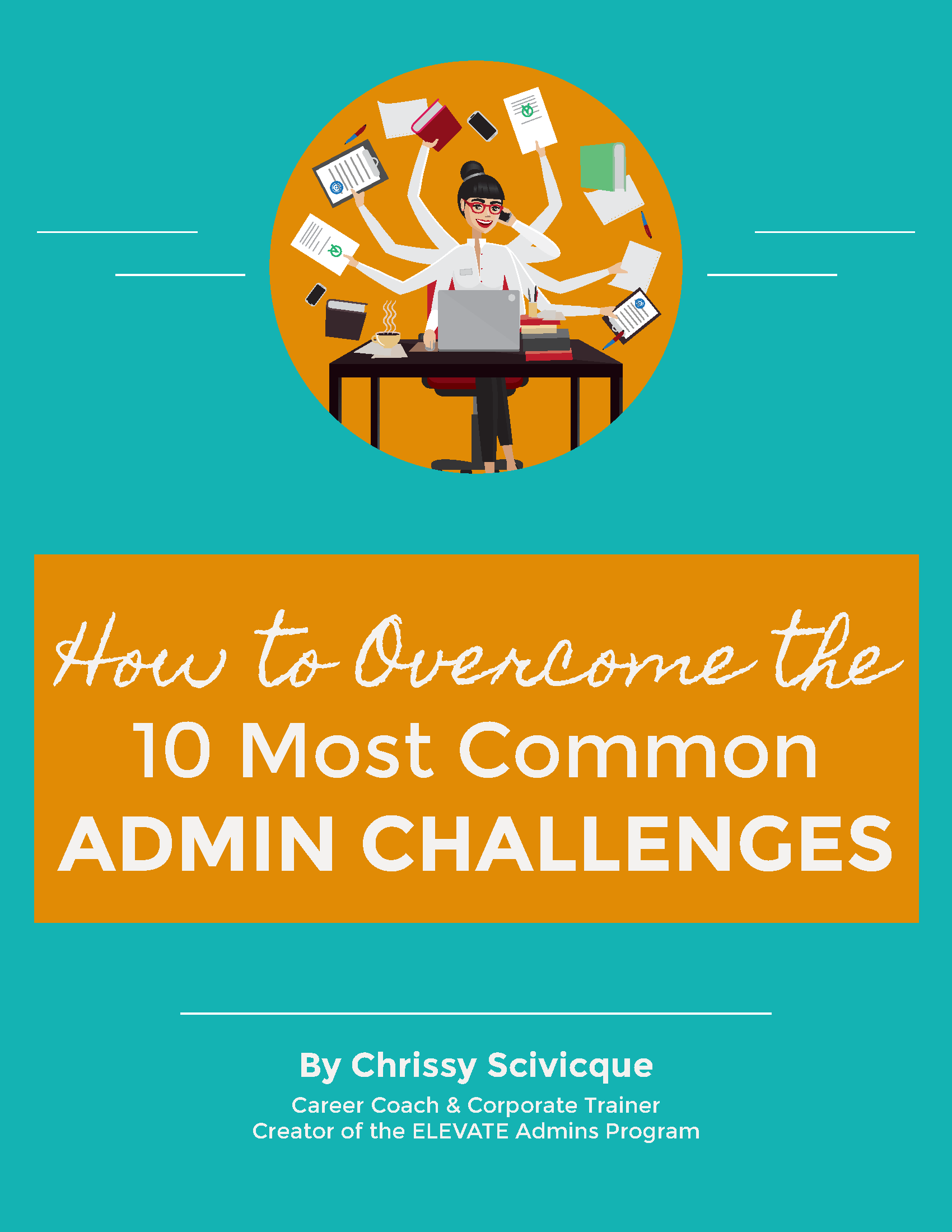 Get the FREE Admin Guide

How to Overcome the 10 Most Common Admin Challenges

Being an Administrative Professional is tough! Get simple answers to your most pressing problems.