Career Success and the Power of Perception

In the business world, it can be tempting to believe we’re all operating in the same objective reality. After all, we deal in things like facts and data. We forget sometimes that reality is actually quite subjective; it’s shaped by the observer. Different people can interpret the same facts and data in entirely different ways. In doing so, they can—in essence—create their own version of reality and shift the course of their future.

As a career-minded person striving for success in the professional world, it helps to remember that your perceptions are not merely a result of reality; they are, indeed, a source of it.

How we perceive the world and our place in it impacts how the world perceives us. Ultimately, that has the power to influence our experience in it.

Let’s break this down…

Perception is literally defined as, “gaining awareness.” However, as humans, we also interpret that of which we become aware. We make meaning of it and judge it. We experience something and immediately evaluate it, based on our own subjective point-of-view. Is it good or bad? Helpful or harmful? Useful or useless? We look at ourselves and pass judgment as well.

Our behaviors are visible demonstrations of how we think. Other people view our behaviors and create their own perceptions—they brand us, so to speak. They judge us competent or incompetent, wise or ignorant, skilled or unskilled, and so forth. Those perceptions may not necessarily be the reality we know or want, but that doesn’t matter.

Other people’s perceptions shape their reality, and their behaviors are a response to this. That perceived reality will influence how they treat you. When they perceive you as a competent, wise and skilled professional, for example, they’ll interact with you as such. They may afford you more opportunities. They may assign more value to your contributions.

Likewise, when others have negative perceptions about you, their behaviors will reflect it.

Here’s the undeniable truth: How others perceive you in the workplace directly impacts your reality—whether or not the perceptions created are objectively true.

From there, the cycle continues. You view the behaviors of others, create perceptions, and so on.

This entire process is depicted in the illustration below. 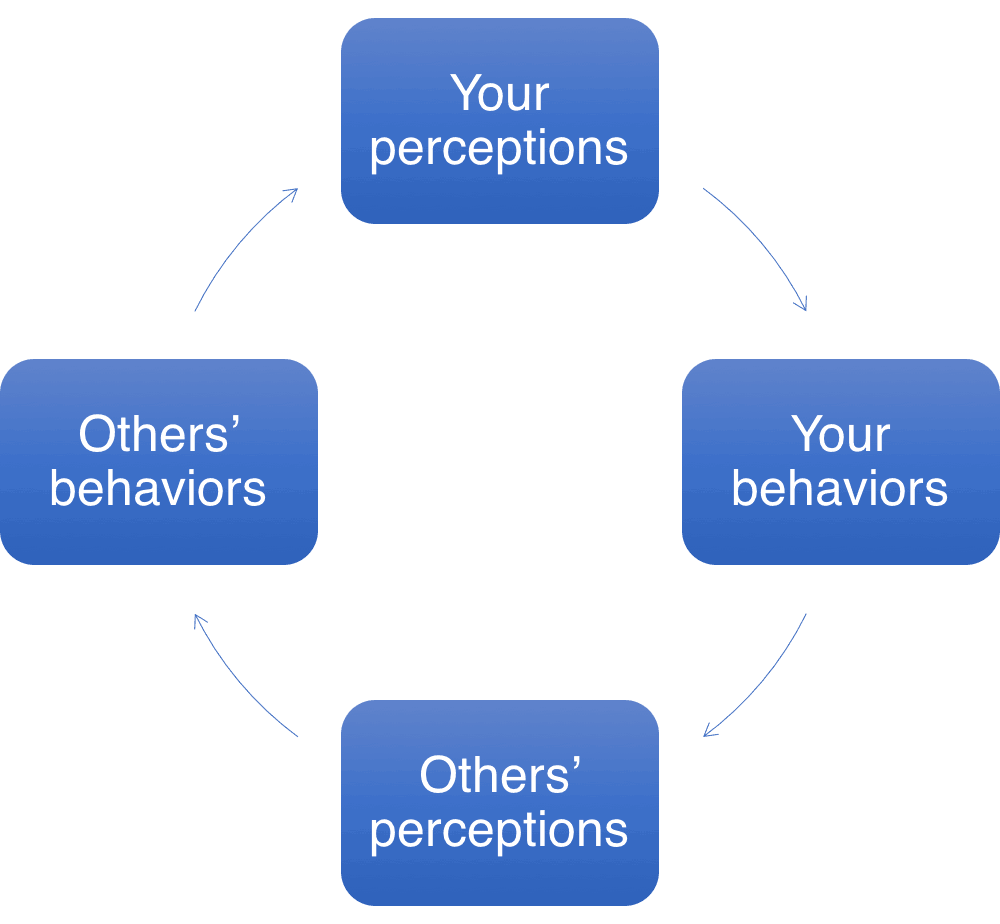 So, how can we harness the power of perceptions in positive ways?

First, we must learn to question how we perceive ourselves and the world around us, and recognize that our interpretation of reality is not necessarily the truth.

With our incredibly sophisticated human brains, we have the power to explore other perspectives. We can actually choose to see things in ways that serve us well, rather than in ways that hinder us.

The Power of Perception in Action

Let’s consider an example most people will find relatable. Imagine you’ve just been told that you didn’t get the promotion you had hoped for. Immediately, your perception is that the decision is unfair. You’re a victim. They’re playing favorites and this is yet another example of how the whole system is rigged. You deserve that promotion and someone has made a grave error.

With this point-of-view, your resulting behavior would probably look quite immature and entitled. This would only serve to assure the decision-makers they were right, and your chances of a promotion in the future would likely vanish.

Or maybe you hear the news and immediately perceive yourself as worthless. If you don’t deserve advancement now, surely you never will. So you slink off into the background and vow to stay exactly where you are.

Again, the decision-makers would see this behavior as confirmation, and your future would be sealed.

Now, imagine using what you’ve just learned about perceptions to your advantage. You know you have the power to shape how you see the world and, in doing so, you know you can channel your behavior in more positive ways. So, you explore the other possibilities.

Perhaps the decision-makers had good reason to pass on your promotion. Maybe you’re missing some critical skills. Maybe you don’t have the right experience. This opportunity didn’t work out, but that doesn’t mean others won’t in the future.

With this point-of-view, your resulting behavior would probably look thoughtful and professional. You would graciously accept the decision, but open your mind to the lessons. Perhaps you’d be inclined to start a dialogue about how you can improve and create a path for promotion in the future.

This behavior would shape others’ perceptions of you in positive ways, and your chances for future advancement would likely improve.

Does it matter whether the decision not to promote you was objectively fair or unfair? No. The decision is made; that’s an irrefutable fact. You can choose to view it in any way you’d like. Why not choose a way that helps you cope with it productively?

At the same time, it would also be helpful to work backwards and ask yourself what existing perceptions might have contributed to the decision not to promote you. What past behaviors have led others to believe you’re not a worthy candidate, and what role have your own perceptions played in that?

This is a fundamental concept upon which career and life success are built.

If you want to change your reality in the workplace or anywhere else, you have to consider perceptions—your own and others’. If you want people to perceive you in positive ways and treat you accordingly, you have to demonstrate the behaviors that warrant it—and that starts with the perceptions you have about yourself and your experiences.

In order for people to respect you, you must respect yourself first. To achieve success, you must first embody the spirit of success.

Here’s the good news: How you think and how you behave are entirely within your control, as demonstrated in the earlier example. When you choose wisely, you can forge new paths for yourself. You can’t always control the outcome, but you can influence it greatly.