How to Deal with Constant Complainers in the Workplace 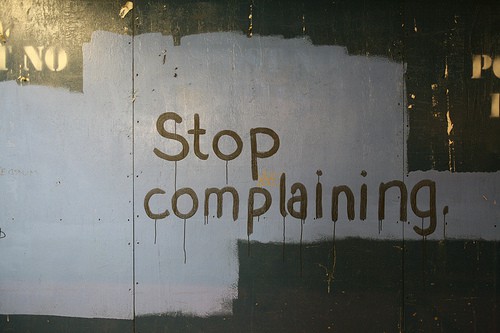 You know that person who always has something to whine about? Super annoying, right? Working with a constant complainer can be a challenge for a variety of reasons. And if you’re not careful, the situation could go from an irritation to a serious career killer. Unfortunately, there’s a lot of bad advice out there regarding this topic. My recommendations are a little different, but I think you’ll understand—and agree—after reading this article.

What most complainers are looking for more than anything is agreement. They want someone to nod and sympathize and say, “Yes, me too.” Psychologists say they’re seeking validation. And while many will tell you that the fastest way to get them to stop is to simply give them what they want, this is dangerous territory in the workplace.

If they’re complaining about the bus being late, yes, the fastest way to get them to move on is to say something like, “Yeah, that would annoy me too.” And that’s probably pretty safe to do.

But this technique is not the way to go when the complaints are directly related to work. If they’re complaining about a person or a task for example, be extremely cautious. If you agree just to get them to shut them up, you could be shooting yourself in the foot. They’ll see you as an ally and, worst-case scenario, they’ll use you as an excuse for why they’re complaints are valid. Imagine them shouting to the rest of the office, “I’m not the only one that feels this way! [Insert your name] agrees with me!” Suddenly, you’re a complainer too. And you’ve just joined a battle you might not want to be a part of.

Hear It & Acknowledge It

Instead of just mindlessly agreeing, you can offer something slightly different. You can hear the complaint and acknowledge the person’s feelings without giving them a “me too”. Simple phrases to use include, “I see” or “Wow” or “Really” or “Interesting”.

Be careful about saying, “Yes” or “Yeah” though. While many of us use these words to acknowledge that we’ve heard someone, they can be misinterpreted as agreement.

In some cases, you need to go further. If someone is constantly using you as a sounding board to voice their dislike for your boss, you can’t continue to sit idly by. They are putting you in a tough spot.

This is where I probably differ with the psychologists out there talking about this topic. My take comes from the fact that the workplace is a different dynamic. The complainer could be putting you in a position that could jeopardize your career.

Now, there’s friendly whining and then there’s something else. I don’t know quite how to define it but you’ll know when complaining goes too far.  Here’s my suggestion.

Ask: “Do you want my opinion?”

Human nature makes most people inquisitive enough to say, “Yes” to this question. And then, the person has given permission. They’re in control of the conversation. They have asked to hear your thoughts on the subject.

At that point, let the person know that you have a different point of view, but don’t try to convince them. Make it short and sweet: “I hear what you’re saying but I see it differently.”

Remember, you can disagree without being disagreeable. So remain polite and professional. But hold firm. Don’t get into a debate on the matter.

Once this person sees that they don’t have an ally in you, they’ll move on and try to find someone who can give them what they need.

Is this uncomfortable? Yes. But, at times, it’s necessary.

I had to do this several years ago with a co-worker who was always complaining to me about something my boss was doing—something I felt was totally fine. She was, in my opinion, being childish. Of course, I didn’t say this to her. But I did let her know that she was putting me in an awkward position and I couldn’t continue to discuss it. I think she was annoyed by me, and she probably turned around and complained about me to someone else, but it fixed the problem. And eventually, she forgot it ever happened.

This person is who he (or she) is. While you can manage the situation (as in my story above), you probably can’t change this person’s victim mentality. He or she will always find something to complain about so don’t expect anything different. These people quickly gain a reputation. In the end, they won’t get very far with that kind of attitude. They’ll never take responsibility for it, but you’ll eventually pass them by. Take comfort in that.