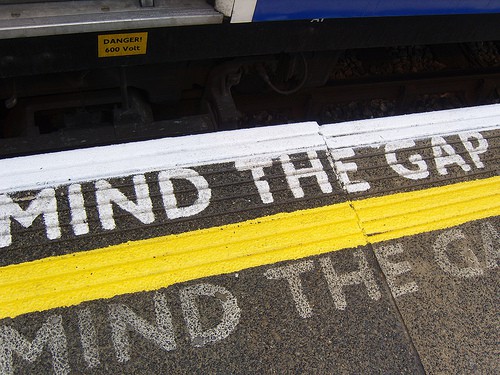 When I was in college, I spent a year in England as part of my University’s study abroad program. What an amazing experience! And, while I brought back a lot of weird slang and an unusual faux accent (which thankfully disappeared quickly), the one British-ism I still refer to regularly is “Mind the Gap.”

You see, the London underground system (which they call the “tube”) has a looping announcement for passengers to “please mind the gap,” referring to the space between the train and the platform. Apparently, tourists like me just love this. It’s so polite! Us Americans would say something like, “Don’t fall in, idiot.” Or, even more likely, we’d post a discreet sign saying, “Property owner not responsible for injury.”

So “Mind the Gap” is a popular slogan for touristy t-shirts in London. It’s also one of those things that can make a gal nostalgic for a little British courtesy and a public transportation system that really works. But that’s neither here nor there.

I bring this up today because, in my work as a career coach, I find most of my clients come to me when there’s a gap of some sort. There’s a gaping hole between where they want to be and where they are. That gap is so big and so intimidating; they have no idea how to cross it. So they simply stand there, on the training, letting it take them wherever it happens to be going. They never make the leap to the platform.

While working with one client in particular, something new dawned on me. As she sat there making excuses for all the ways in which her career was out of her control, complaining that her motivation was low and her confidence shot, I suddenly heard that polite safety announcement in my head, “Please mind the gap.”  And that’s when it hit me.

“Maybe your mind IS the gap!” I shouted.

She stopped speaking and looked at me like I was possibly having a stroke.

“You see,” I told her, “the gap between where you are and where you want to be isn’t that big. But your mind has turned it into something insurmountable. You’re letting your fears and anxiety run the show. We just have to get your mind back in check. It’s like that old trick, mind over matter. Except…it’s mind over job!!”

And thus a new idea was born.

Here’s the truth: Your mind is a powerful tool. But, if you don’t actively manage it, all kinds of junk can take over. Fear, anxiety, self-sabotage…these things live in everyone. When left unchecked, they can create a negativity spiral. That’s when that gap between where you are and where you want to be becomes a giant chasm, impossible to leap across.

If you’re not happy at work, you’re not powerless. Perhaps your mind has played tricks on you, messed with your confidence and forced you to believe you’re stuck. But, in reality, you have everything you need. You CAN take charge of your career by simply mastering your mind.