What James Franco Can Teach Us About Productivity 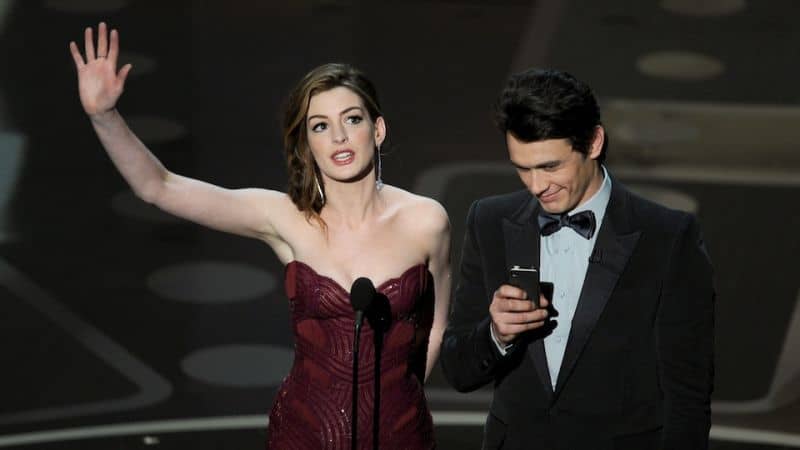 Admittedly, this post is a little late. The Oscars were several weeks ago now but, for those of us who love movies, fashion, and snarky commentary from Joan Rivers, this year’s ceremony won’t quickly be forgotten.

In case you missed it, the show was widely panned by critics who placed the blame squarely on the shoulders of the two young hosts: Anne Hathaway and James Franco. Franco, in particular, received a brunt of the criticism because of his lazy demeanor. Some people went so far as to suggest he was stoned during the telecast—an accusation I think is probably unfounded, considering what we know of this man. In truth, it’s probably much more likely that he was just the victim of his own overly ambitious schedule. Those who still think multi-tasking is legitimate productivity technique, pay close attention. This is what it looks like when the quest for productivity goes wildly out of control.

Who Is James Franco?

First off, here’s a little background for those of you who don’t really know who James Franco is or why we should care: He’s a 32 year-old actor with a pretty stellar list of credentials including a Golden Globe for his performance as James Dean and mainstream pop culture cred for playing Harry Osborn in the Spider Man trilogy and for his role as a loveable pot dealer in Pineapple Express. This year, he was also nominated for the Oscar for Best Actor in 127 Hours, making his hosting gig even more unprecedented.

However, the most impressive thing about James Franco isn’t his acting resume; it’s his extra curricular activities. The list is pretty incredible…and very odd. A few of the most notable things he has done include a guest role on General Hospital (which he called “performance art”) that mirrored his actual life, a generally well-received book of disturbing short stories called Palo Alto, and various multimedia art projects that have been on display at Sundance and the Museum of Contemporary Art.

On top of all this, he’s an almost compulsive student. After earning his Bachelor’s Degree in English from UCLA, where he took 62 credits per quarter (the normal max is 19), he then simultaneously attended graduate school at Columbia University for creative writing, NYU for filmmaking, Brooklyn College for fiction writing and North Carolina’s Warren Wilson College for poetry. Now, he’s a Ph.D. student studying English at Yale and also attends the Rhode Island School of Design.

I’m pretty sure he’s not a pothead. That kind of schedule doesn’t exactly align with the typical stoner mentality.

But keep all of this in mind as we explore the Oscars debacle and how this uber-productive person got in over his head.

Watch Out for Diminishing Returns

Now, James Franco is kind of known for that squinty eye thing. It’s actually pretty adorable. But during the Oscars ceremony, he looked downright out-of-it. At one point, he even stumbled over his words so badly, I don’t blame people for thinking drugs could have been involved. But that’s what happens when you’re exhausted. Running around the globe—from graduate classes to film sets and back again—must cause an unbelievable strain on the body and mind.

In a recent interview, Danny McBride, Franco’s costar in an upcoming movie, said the following:

“There was a teacher that he had at school in New York, and James (Franco) had missed a class or two because of filming, and (the teacher) basically said if he didn’t come to this class, he would be dropped from the class. So for the last half of the production, James (Franco) would finish shooting Monday night, get on an airplane in Belfast (Northern Ireland), fly to New York, go to the class, get back on a plane, fly back to Belfast and come back to work every week.”

If this is any indication of how this guy manages his crazy schedule, it’s no wonder he was out of it.

There’s a limit to how much stuff one person can do before exhaustion sets in. If you want to be productive, you have to recognize when you’ve reached the point of diminishing returns—when you’re so exhausted that you’re actually working against yourself. I think that’s what happened the night of the Oscars.

Franco actually started off the evening with his cell phone in hand, taking pictures of the Oscars audience to post on Twitter. Um…kind of a bad idea. In fact, the night of the ceremony, he posted dozens of tweets, complete with photos and videos. This is the very definition of multi-tasking and the resulting unfocused, disinterested, and distracted performance the audience saw is exactly why we should all avoid it.

Franco’s attention was literally split in (at least) two different directions from the get-go. While one side of his brain was thinking, “Focus on your lines, be charming, smile big, make ‘em laugh, blah, blah, blah,” the other side was thinking, “Get a good shot so the Twitter fans will be happy, gotta upload this as soon as I get backstage, wonder if that pic was blurry, blah, blah, blah.”

Doing two things at once might sound easy enough. It might physically even BE easy enough. But mentally, you’re straining your resources. And, when something really matters, you want to be playing with 100% capacity. Divided attention is usually fairly obvious to everyone involved, and most people find it insulting. This is one of the reasons I think people were so outraged by his lackluster performance. It was like a smack in the face for those of us who were expecting more.

Jack of All Trades = Master of None

Poor James Franco turned in a really bad performance as host of the Oscars. And, as it turns out, his peers at Yale also raked him over the coals for his lame Twitter stream. So, apparently, he failed at both things that night. This is pretty typical for multi-tasking. When you try to be a “Jack of all trades” you end up “master of none.”

Who’s to say if the rest of his life will play out the same way? From this perspective, it certainly doesn’t look good.

When I think of James Franco, I remember my number one rule for productivity: If you’re trying to do too much, there’s no system in the world that can help you. Dividing your attention and packing your schedule full to the point of exhaustion is a sure-fire way to end up with a bunch of mediocre performances.

Clearly, a person like James Franco doesn’t want to be mediocre. And when he has his head in the game, he’s insanely talented. But the same productivity rules that apply to everyone else, also apply to him. Multi-tasking doesn’t work any better for famous people than it does for the rest of us. Trying to pack every conceivable goal into the span of a few years might sound great in theory, but I’m guessing that, in practice, it’s a big pain in the ass.

So take heed. Give your full, undivided attention to the one, important task at hand before moving on to the next. No matter how rich and talented and smart you are, human productivity has its limits.

Even an adorable smile can’t change that.