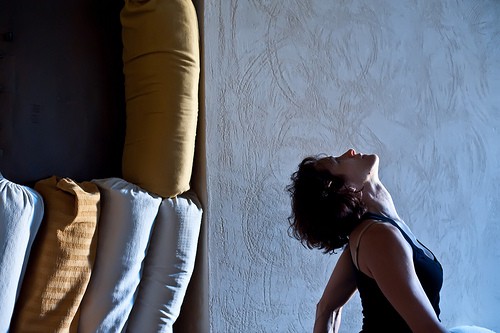 So that’s where I was all weekend long. It started on Friday, when I arrived at my fifth (and final) three-day life coaching class. I was excited. I was ready. I was in it to win it.

And then I wasn’t. Just like that. Something flipped in my brain and I was suddenly a cranky two-year-old. All this personal growth stuff just didn’t sound fun anymore. I didn’t feel like examining myself or pushing myself or improving. I didn’t want to help others. It just felt…wrong.

I ignored it at first. Friday came and went and I pushed through as best I could, but my heart wasn’t in it. Saturday progressed at a snail’s pace. And then finally, I snapped. I grabbed my favorite coach in class, yanked him outside during an exercise and unloaded a pile of verbal vomit on top of him. And, ya know what? It was cool. He handled it. He listened and didn’t judge and gave me permission to be whatever I needed to be in that moment— selfish, angry, confused. It was A-OK.

And then I went back to class.

The next day, Sunday, our last day of class, something shifted. The resistance was still there, but instead of beating myself up for it, I let myself sit with it. I didn’t fight it or ignore it. I just accepted the reality of what I was going through. And it dawned on me that resistance is a natural part of growth. It happens to everyone. I’m not special or weird for feeling this way. This understanding made me almost giddy.

It then occurred to me, during a conversation with a fellow classmate (who also happens to be a yogi) that I deal with resistance all the time in yoga class. Sure, it’s more physical than mental, but the same principles apply. I’ve found that, when you’re trying to stretch into a particularly difficult posture, and your body is tight and resistant, it doesn’t help to push your way through. In fact, that’s a sure-fire way to hurt yourself. The better approach is simply to relax into it. Let the resistance be there, keep your breath steady, and slowly, you’ll ease a little closer to your goal.

Ultimately, you have to give yourself space to feel the resistance, respect it, and work with it instead of against it. I think that goes for all kinds of resistance.

I share this story with you because resistance is normal. I want you to know that everyone goes through it. There are times to push and challenge, and there are also times to relax and let go. You get to make the choice. Give yourself permission to be a bratty toddler now and again. Sometimes, you’ll learn more from that experience than you would otherwise. When you relax into it, you may actually stretch more.